Before this renaissance, all great Irish writers needed to leave Ireland to gain access to patronage, opportunity and success, including: Swift, Sheridan, Wilde, Shaw, Stoker, Moore and Yeats.

George William Russell (AE) and William Butler Yeats became the two central figures in this new movement. AE remained in Ireland building the literary foundation, writer by writer. AE's selfless dedication to identifying new talent and providing practical support and guidance was transformative. Yeats focussed on advancing his own career, but this positioned him perfectly to provide that extra sprinkle of stardust upon this new 'Celtic Twilight'. 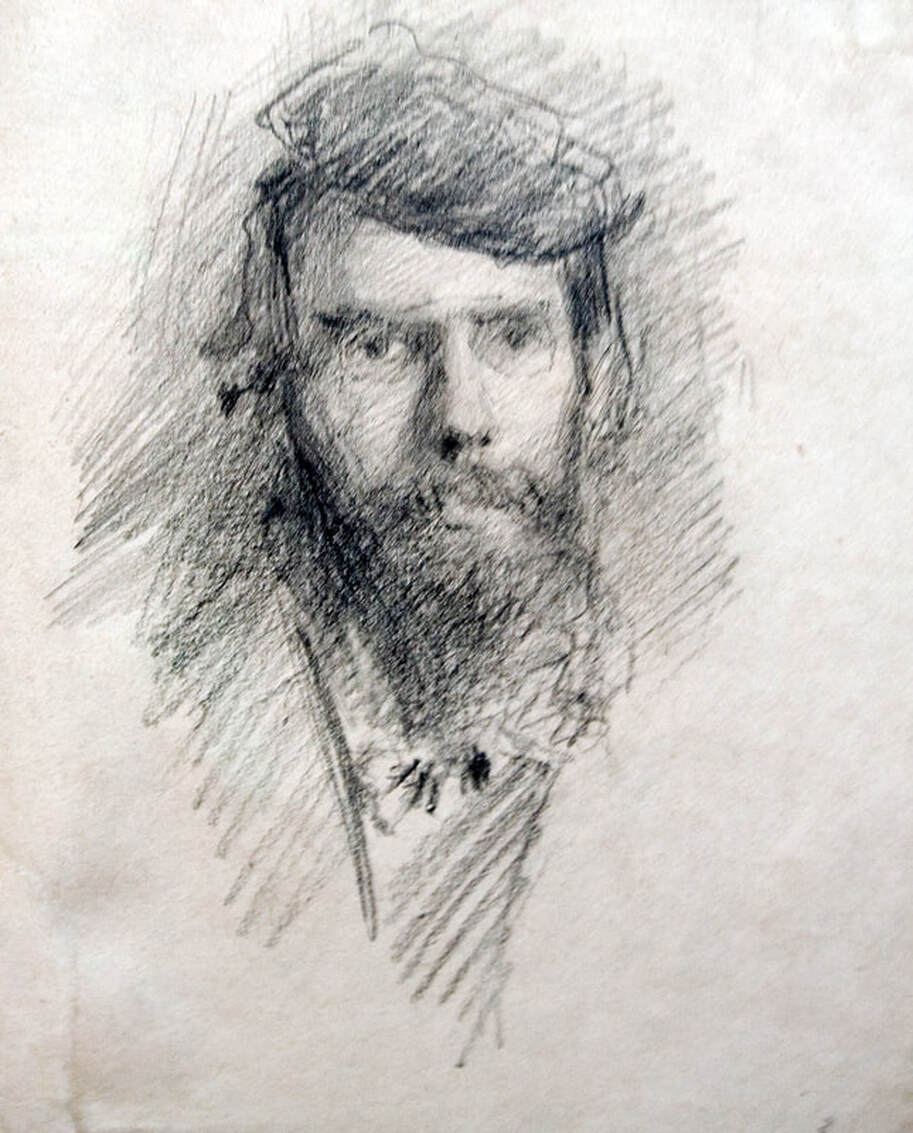 AE & Mary Poppins
George William Russell was a benevolent genius who dedicated his life and energies to advancing a number of causes, in the main, related to the well-being of the people of Ireland. He did this through the Arts, Politics/Economics, the Co-operative movement, Social Reform, journalism, and his deep beliefs in the connectivity between the inner and outer worlds. And into this mix, in 1925, came a bright and lively young woman called Pamela Travers, who had more questions than answers, in her search for purpose, identity, love, home and success. AE loved unearthing, promoting and supporting new energetic and vibrant talent. Pamela was right up his street!

Pamela Travers, the author of the Mary Poppins books, loved AE’s poetry while she was growing up in Australia. She moved to London in 1924 and posted two of her poems, with an enclosed stamped addressed envelope, to AE in Dublin in January 1925. AE published her poems and replied to Pamela in March 1925 enclosing a cheque. Pamela wrote to Russell telling him that she was coming to Dublin and AE invited her to visit him. They met in AE’s Merrion Square office; he was 57 years old and she was 25. AE was flattered by her “adoration” and she was overwhelmed by his kind attention. Pamela’s literary icon offered her his scholarly advice and asked her to call again before returning to London. She went to his office a few days later but left without knocking the door, thinking that his unexpected kindness was just amicable courtesy. Three weeks later AE arrived on Pamela’s doorstep with a gift – copies of all of his books!

She was soon embraced by the Dublin literary scene,  where AE opened doors of opportunity for her both in London and America.  In the words of Pamela, “AE fished up friends for me from his inexhaustible cauldron.” AE understood that Pamela had an interest in mysticism and fairy tales long before she left Australia, so he helped her along the spirtual path and introduced her to the study of the spirit world, theosophy, mythology and Eastern Religions – all of which fascinated Pamela for the rest of her life. AE liked her poetry and her Irish connection which was not just some romantic childhood fantasy. Her father’s parents were Irish, and he had been schooled in Ireland before eventually going to Australia. Pamela had relatives in Ireland, and she became acquainted with them when she visited AE in Dublin.

Pamela was an exceptional person, determined and forthright, creative and intelligent, yet also delicate, unable to heal her childhood wounds, and searching for meaning in her life. AE was greatly impressed by her imagination and her fiercely rebellious nature. She was by no means an empty vessel into which he poured his ideas, but he had answers and directions which from the start helped her to explore and crystallise her core. They became close friends, writing each other hundreds of letters, and meeting up as often as possible.

​Pamela had been a London literary-scene correspondent for New Zealand’s Christchurch Sun newspaper since arriving in London, and on Saturday, November 13, 1926 her Mary Poppins character first appeared in it as short story titled ‘Mary Poppins and the Match-Man’.


Many of the elements from that first newspaper story featured in the first Mary Poppins’ book when it was published in 1934:
Bert and Mary; The Banks family; A parrot headed umbrella; A pavement drawing that comes alive; Bert dresses in an imaginary world of striped coat, straw hat and white flannel trousers; Mary and Bert have tea and cakes and climb onto the horses of a merry-go-round; and when Mary Poppins returns home she tell the children that she has been to fairyland!

The Match-Man was Bert the street artist, based on AE who Pamela affectionately called the Match-Man due the trail of spent matches wherever he went – from constantly relighting his pipe!

In January 1927 Pamela asked AE if she could accompany him on his next long summer holiday to Dunfanaghy, Co Donegal. He was delighted and they had their first holiday together in June 1927.

In ‘The Death of AE: Irish Hero and Mystic’ Pamela offers glimpses of a holiday she spent with AE in a special coastal place, complete with a fairytale cottage, hidden in a deep wood which overlooked the scenic Marble Hill Strand, where AE loved to paint and write poetry, and where they had been able to be alone together.  She wrote:

I stayed with him often in his beloved Donegal, at Janie’s-on-the-Hill above Dunfanaghy – a white washed cottage where at night one would hear the cows moving about in their stalls below the attic bedroom and in the daytime Janie churning butter or clanging the lid of the iron cauldron that swung on a chain above the peat fire and in which everything was cooked: bread, meat, cake, soup. … From Janie’s, he would take me with him on his excursions to friends in the neighbourhood or to those parts of woodland or strand that set up in him the strongest vibrations. Was he intentionally educating me, I wondered! No matter: it was being done, with or without intent.

In 1932 AE suggested that Pamela should transform her non-magical young nanny into a powerful white witch. He wrote:
​
When you go to your Cottage drop me a postcard with the address of that abode of the vulture witch with her broomstick. It would be rather a nice subject for a fantastic tale of a young witch who found that by white magic the broomstick would fly as well as by the black art & she went here and there doing good deeds or looking at loveliness & wonders. So think over a tale which would use all your powers of fantasy ‘The Adventures of a Witch’ and it may be the idea for letting you say all you want to say.

Although AE spent much of his time writing thousands of serious journalistic articles about society, political turmoil and economic issues, it is practically impossible to find one complete piece which is not warmly wrapped in a blanket of spiritual wonder and mystical magic. He was tremendously imaginative and creative, and whimsical beyond compare, and exceptionally witty. Myriad hidden spiritual thoughts, talking objects, life within pictures and a oneness with nature, flowed effortlessly and constantly from his mind. AE helped Pamela to explore unknown possibilities and imaginations primarily in conversation across the ten years friendship which saw her become a highly respected writer. They also wrote numerous letters back and forth across the Irish Sea when they were not together.

Over the next years AE continued to help Pamela develop her stories and the first complete Mary Poppins book was finally published in 1934. Pamela insisted on giving AE a share of her writer’s cheque as he had been so crucial in its development. AE had never taken any payment from his protégées in the past, but on this occasion he accepted Pamela’s offer.
​ 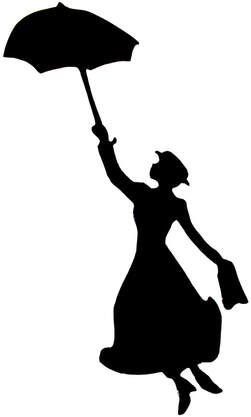 I see so much of AE and Pamela in the characters of Bert and Mary Poppins. From their first outing in a short 1926 story, in which Mary is a young and inexperienced nanny and where the magic emanates from Bert the Matchman, to the end of the second Mary Poppins book, when Mary has transformed into an older, wiser, and self-assured magical figure, I see how Pamela herself had grown aided by her great friend AE. At the close of Mary Poppins Comes Back, completed shortly after AE’s death, Pamela creates a personal element of closure between herself and AE. In 1926, in the story Mary Poppins and the Match-Man and then in 1934 in the story The Day Out, they rode the Merry-go round together, she on a black horse and AE on a white one, but then in 1935, with him gone, Pamela (Mary Poppins)  rides alone on a dappled horse, possibly symbolising a shared spiritual unity. The text includes utterances denoting finality – ‘Never again! Never again!’ .. ‘If only we could have gone on forever!‘ .. Mary gazes down at the children – ‘Her eyes were strangely soft and gentle in the gathering dusk‘ (AE’s favourite time of day) and says for the second time that day ‘All good things come to an end.‘

Mary Poppins chooses a return ticket (which is a strange option for such a ride, but may well relate to AE’s deep belief in reincarnation) thoughtfully saying ‘You never know’. The Merry-go-round spins and rises up beyond the trees and soon a new star appears in the night sky. Could this new star be her AE? On the final page Pamela writes –‘And high above them the great shape circled and wheeled through the darkening sky, shining and keeping its secret for ever and ever and ever…‘ 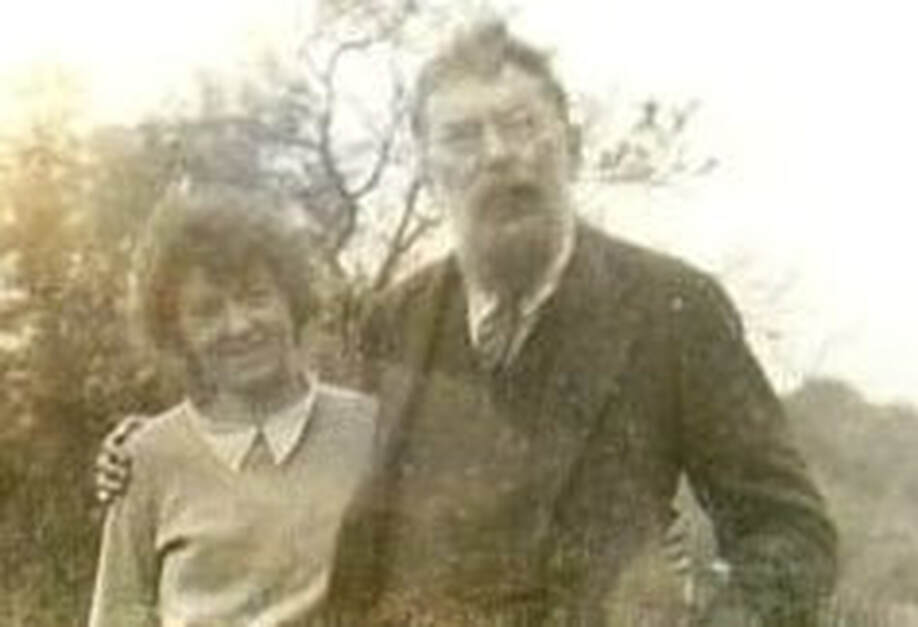 AE and Pamela
Pamela was never his trainee or follower. He helped her. He connected with her. He raised her spirits and she raised his. Pamela admired AE, loved his company, and valued being educated by him. Such a warm and loyal mutuality grew between them that she became AE’s closest companion and comfort during his final days, taking charge of his personal affairs and final letters. She later wrote a beautiful piece about his passing, in ‘The Death of AE: Irish Hero and Mystic’. Pamela  accompanied AE’s remains from England back to Ireland, and was at his side as the mile long procession of mourners walked from AE’s famous office in the heart of Dublin, to his burial place close to 17 Rathgar Avenue where he had lived for thirty years. A little later, grieving deeply, she went back to Ireland and spent six weeks in Donegal, staying where she and AE had holidayed, to absorb what lingered of his spirit there.